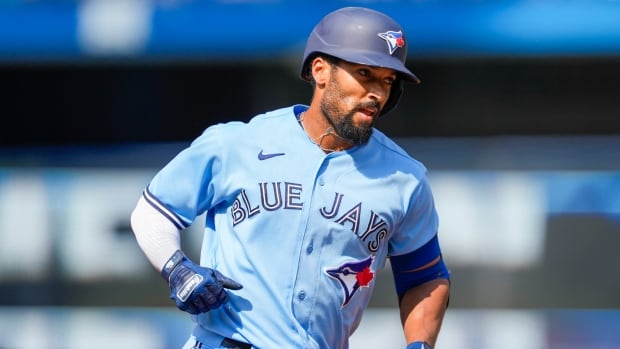 This is an excerpt from The Buzzer, which is CBC Sports’ daily email newsletter. Stay up to speed on what’s happening in sports by subscribing here.

The Jays fell short. Now what?

The most entertaining ride in years for Blue Jays fans came to a full and complete stop yesterday when Toronto finished the season one game out of a playoff spot. The Jays did all they could on the final weekend, sweeping the hapless Baltimore Orioles by a combined score of 28-9 over three games, but it just wasn’t quite enough. The Boston Red Sox and the New York Yankees held onto the two American League wild-card spots (barely) with victories in their final at-bats of their final games yesterday.

While the conclusion was certainly unsatisfying, this Jays season — particularly the last couple of months — featured a lot of highs. Vladimir Guerrero Jr., who’s still only 22, realized his potential by clubbing 48 homers to tie for the big-league lead while topping the AL in on-base-plus-slugging percentage. He’ll lose the MVP vote to two-way phenomenon Shohei Ohtani, but Guerrero was the best hitter in the AL — maybe in all of baseball. Toronto also got an MVP-grade season from second baseman Marcus Semien, who hit 45 homers, stole 15 bases and finished second to Guerrero in Wins Above Replacement among AL hitters. Young shortstop Bo Bichette (29 homers, 102 RBIs, 25 steals) and outfielder Teoscar Hernandez (32, 116, 12) were great too. On the mound, Robbie Ray put himself in Cy Young contention by leading the majors in strikeouts and topping the AL in innings pitched and ERA to lead a surprisingly solid rotation. Canadian Jordan Romano proved to be a strong closer.

In a just world, all that would have added up to a playoff berth. But the Jays caught a frozen wave of luck, finishing eight games worse than their sparkling plus-183 run differential (fifth-best in all of baseball) suggests. Based on that metric, Toronto should have won 99 games, which would have tied the club record set in 1985 — and bettered the 1992 and ’93 championship teams by three and four wins, respectively. Plus, the Jays got only 78 games from George Springer, their marquee free-agent signing from last off-season. Also, consider that the Jays play in the toughest division in baseball, and that they didn’t get a true home game until July 30. They spent the first four months of the season playing out of minor-league parks in Florida and Buffalo, where they had a combined .500 “home” record before the Canadian and Ontario governments deemed it safe enough for them to return to the dome for the first time since 2019. After moving back in, the Jays went 40-23 to close the season. It’s hard to imagine that playing in their true home all season wouldn’t have been worth at least one game in the standings. In so many ways, this team deserved a much better fate.

Toronto’s future looks bright, but there’s some significant business to take care of first. Semien bet on himself last winter by taking a one-year deal, and he hit the jackpot. If the Jays don’t give him a big long-term contract, someone else will. Ray is also looking to cash in as a free agent coming off his magical season. Matz can fly the coop too, while Hernandez is eligible for salary arbitration — and a raise from the very team-friendly $4.325 million US he earned this year. Speaking of team-friendly salaries, Guerrero and Bichette made less than $1.2 million in salary combined. They’re too young to escape the team’s control for a while, but they’ll want big deals at some point. That could hamper ownership’s willingness to sign free agents.

As for the playoffs that Toronto missed, they start Tuesday at 8 p.m. ET with a tantalizing one-game AL wild-card showdown between blood rivals New York and Boston at Fenway Park. The winner will face Tampa Bay in the best-of-five Division Series round, which will also see Houston take on the Chicago White Sox. The National League wild-card matchup looks fantastic too: the defending World Series champion Los Angeles Dodgers, who won 106 games and are probably still the best team in baseball, host the St. Louis Cardinals, who rattled off 17 consecutive victories from Sept. 11-28, on Wednesday at 8:10 p.m. ET. The winner faces San Francisco, which won an MLB-high 107 games, while Milwaukee meets Atlanta in the other NL Division Series.

Dan Shulman looks back at the Toronto Blue Jays season

Canada named the first three players to its Olympic men’s hockey team. Forwards Connor McDavid and Sidney Crosby (hold on, are we sure about these guys?) and defenceman Alex Pietrangelo were the bold choices announced. Yes, it’s extremely early for this. The final rosters aren’t due until January. But Canada was asked to release its (very) short list today, presumably to start generating hype with the Beijing Games opening in exactly four months, on Feb. 4. And, hey, let’s not act like we’re above taking any opportunity to talk Olympic hockey. Check out Rob Pizzo’s initial picks for the entire Canadian roster here.

In case you missed it…

A few more things from the weekend that you should know about:

Andrew Wiggins got the vaccine. Faced with being unable to play home games for the Golden State Warriors because of a local order requiring proof of vaccination to attend indoor sporting events, Wiggins finally relented. The Canadian veteran, who’s due to make more than $31 million in salary this season, had tried to get a religious exemption in order to avoid the needle, but the NBA rejected his request. Read more about Wiggins’ reversal here, and about NBA great Kareem Abdul-Jabbar’s call for the league to get tougher on unvaxxed players here.

The National Women’s Soccer League commissioner resigned. Lisa Baird stepped down as the fallout continues around a sexual harassment and misconduct scandal involving a longtime coach. Two former NWSL players came forward last week with allegations of harassment, including sexual coercion, against North Carolina Courage coach Raul Riley, who was then fired. The league cancelled its weekend matches, and Baird resigned Friday night. A three-woman executive committee is now overseeing the NWSL, which launched an independent investigation Sunday into its handling of abuse claims. U.S. Soccer has also hired an outside investigator to look into abusive behaviour and sexual misconduct in women’s pro soccer. Read more about the NWSL mess here.

The big Brady vs. Belichick showdown ended in… a three-way tie? Tom Brady’s Buccaneers beat Bill Belichick’s Patriots 19-17 last night in the first meeting between the iconic QB-coach duo that produced six Super Bowl victories during their run in New England. But Belichick got a W of sorts too by designing a defensive game plan that resulted in Brady completing barely half of his passes and throwing zero touchdowns under a steady rain. And if we’re all measuring success in Twitter impressions now, maybe the real winner was Steve Belichick. The coach’s son and mulleted Patriots outsider linebackers coach launched a thousand memes with facial expressions like this:

When the edible hits <a href=”https://t.co/uehM2bVo1o”>pic.twitter.com/uehM2bVo1o</a>

You’re up to speed. Talk to you tomorrow.