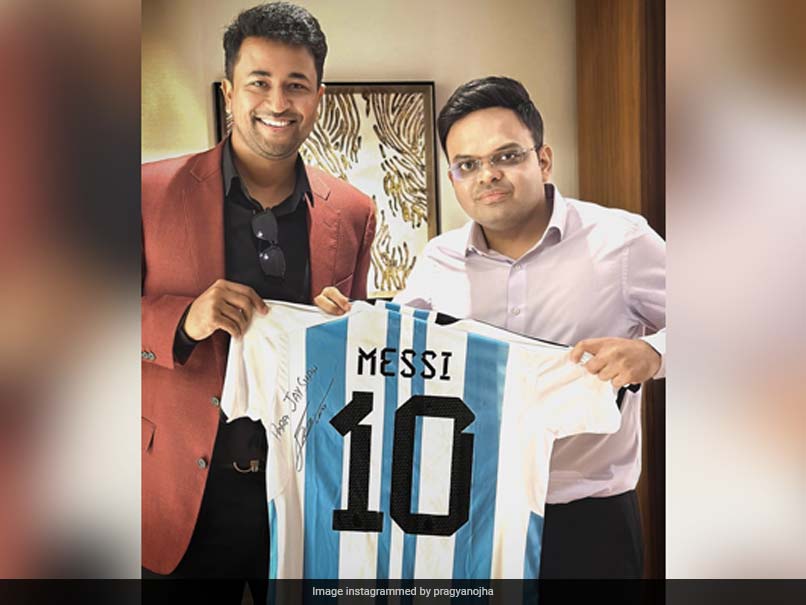 Lionel Messi, arguably the Greatest footballer of time, made the sporting world his own as he went on to lift the FIFA World Cup title with Argentina, beating France on penalties in the final. After Messi and Argentina’s triumph, celebrations erupted not just in Argentina but in all corners of the globe. Even in India, people celebrated Argentina’s third World Cup triumph in extravegant fashion. While there’s no denying that Messi enjoys a grea fan-following in India, the 7-time Ballon d’Or winner also did his bit by sending a signed jersey to the secretary of the Board of Control for Cricket in India (BCCI), Jay Shah.

Pragyan Ojha, who is Indian cricketers’ association representative on the governing council, shared a picture of him with Jay Shah while holding the signed Messi jersey.

Ojha wrote in the post: “#GOAT sends his best wishes & signed match jersey for jay bhai! What a humble personality. Hopefully I will get one for myself…. Soon”

Messi, who has virtually won everything his career had to offer, was only missing a FIFA World Cup trophy to comlpete his resume. In what was his 5th FIFA World Cup, the Argentine scored 7 goals and also gave 3 assists as La Albiceleste went all in the way in Qatar.

Messi was also adjudged the player of the tournament and was presented with the Golden Ball for the second time in his career.

Messi was majestic on the night of the final, scoring twice for Argentina and then also converted his penalty in the shootout as Kylian Mbappe’s hat-trick had pushed the match beyond the extra-time.